Been to the UK first time after Brexit, and it was easier than I expected – especially with the special gear I carried with me, you’ll see on the photos underneath 😉 !

Reason for this visit was Spectrum40 at Walsall, on Saturday 30 April 2022.

So, Friday morning, up we go, and… down again, after only short of an hour.
Jumped in and out Stansted Airports WH Smith, for this warm welcome I got: 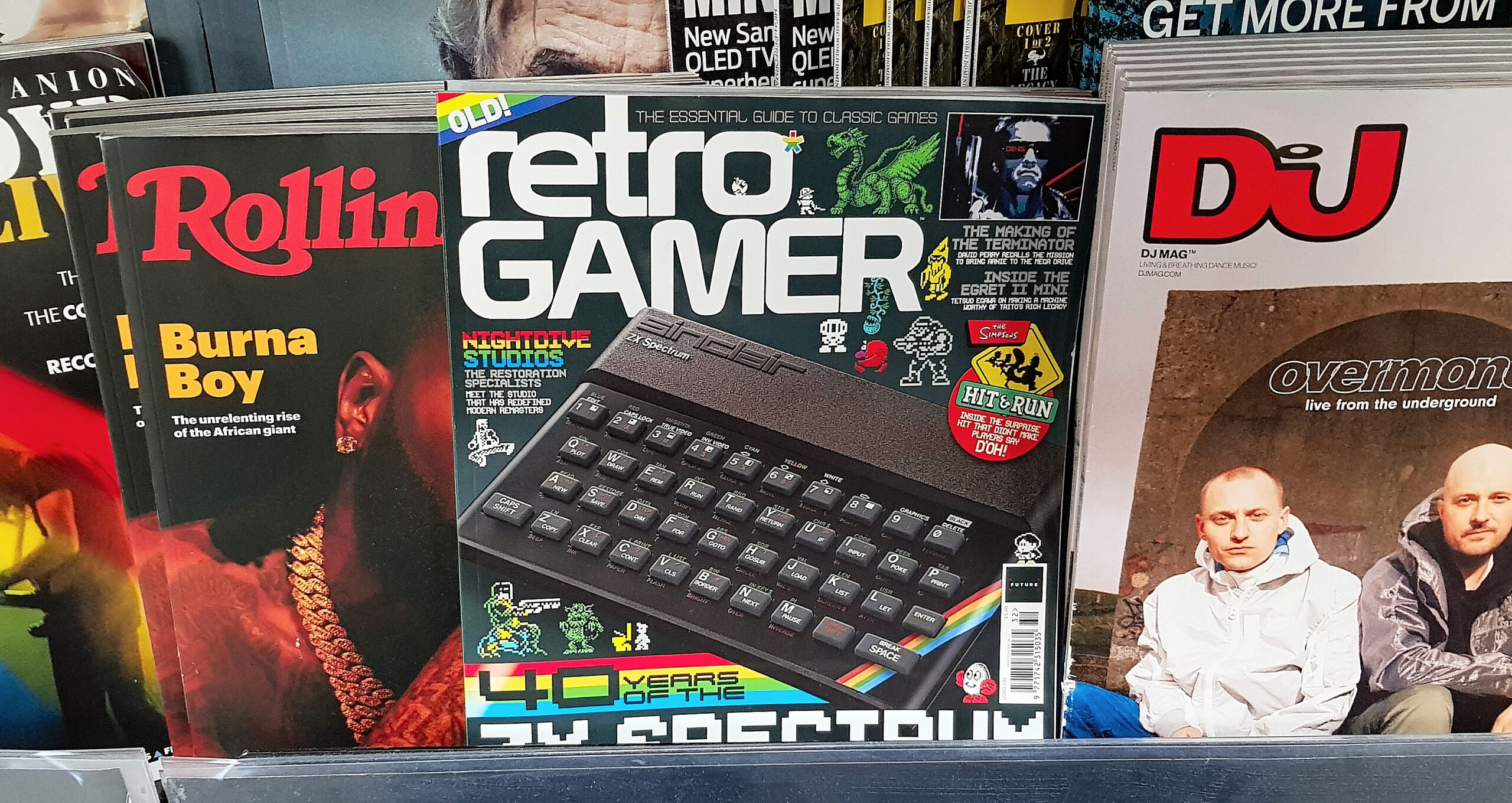 Nothing serious with luggage and ID checks, so off we go with the train to London, then a subway just to get to another train to Birmingham: 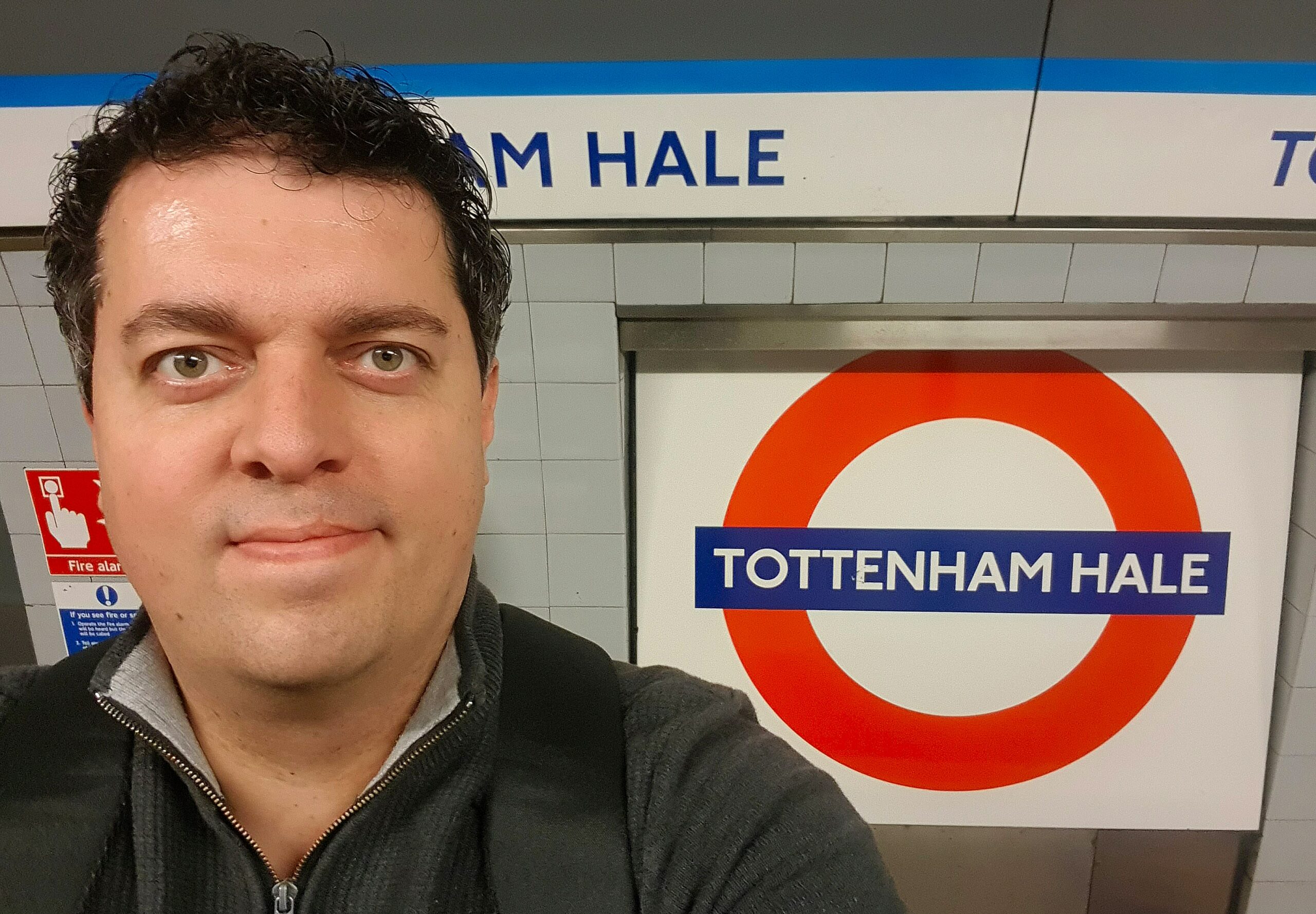 Once I finally were done with public transport after over 3 hours, I got out of the train station at Walsall.
Bigger WH Smith here, and yes! All ur ZX Spectrum and retro computer mag – great work Chris Wilkins!

So, took a walk to my hotel, about 3 miles from the train station.
Then did some work on the special thingy I brought with me, to make it… shine! 😉

After an hour or two, got to a pub to meet up with some great guys.
After that we had dinner at the other side of the street (which is a good thing after some beers..). 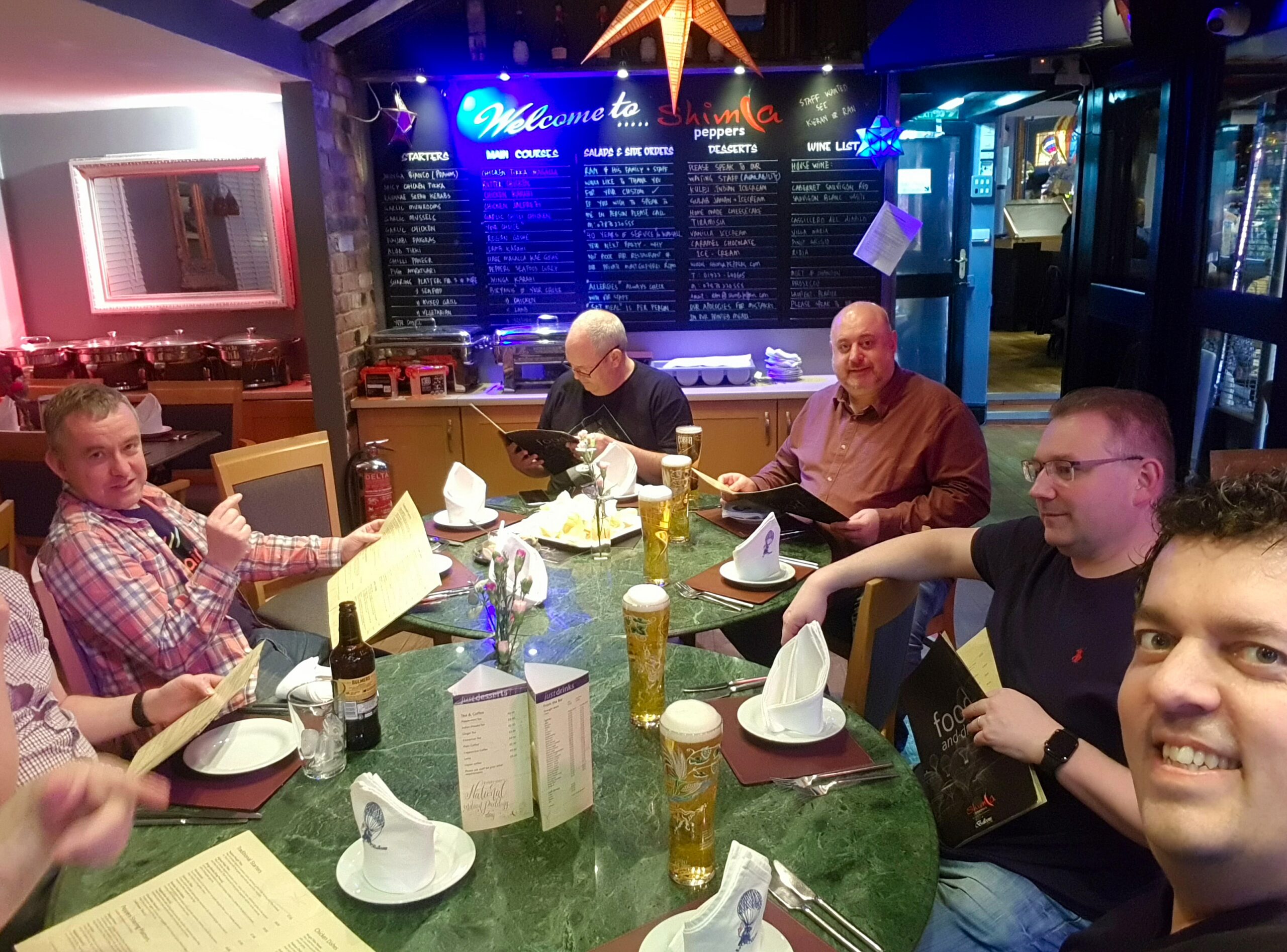 I made one mistake after that: I walked back to the hotel, though my feet already started aching because I brought the wrong shoes, and had quite a heavy backpack with me.

Anyway, next day, of we go to the venue! 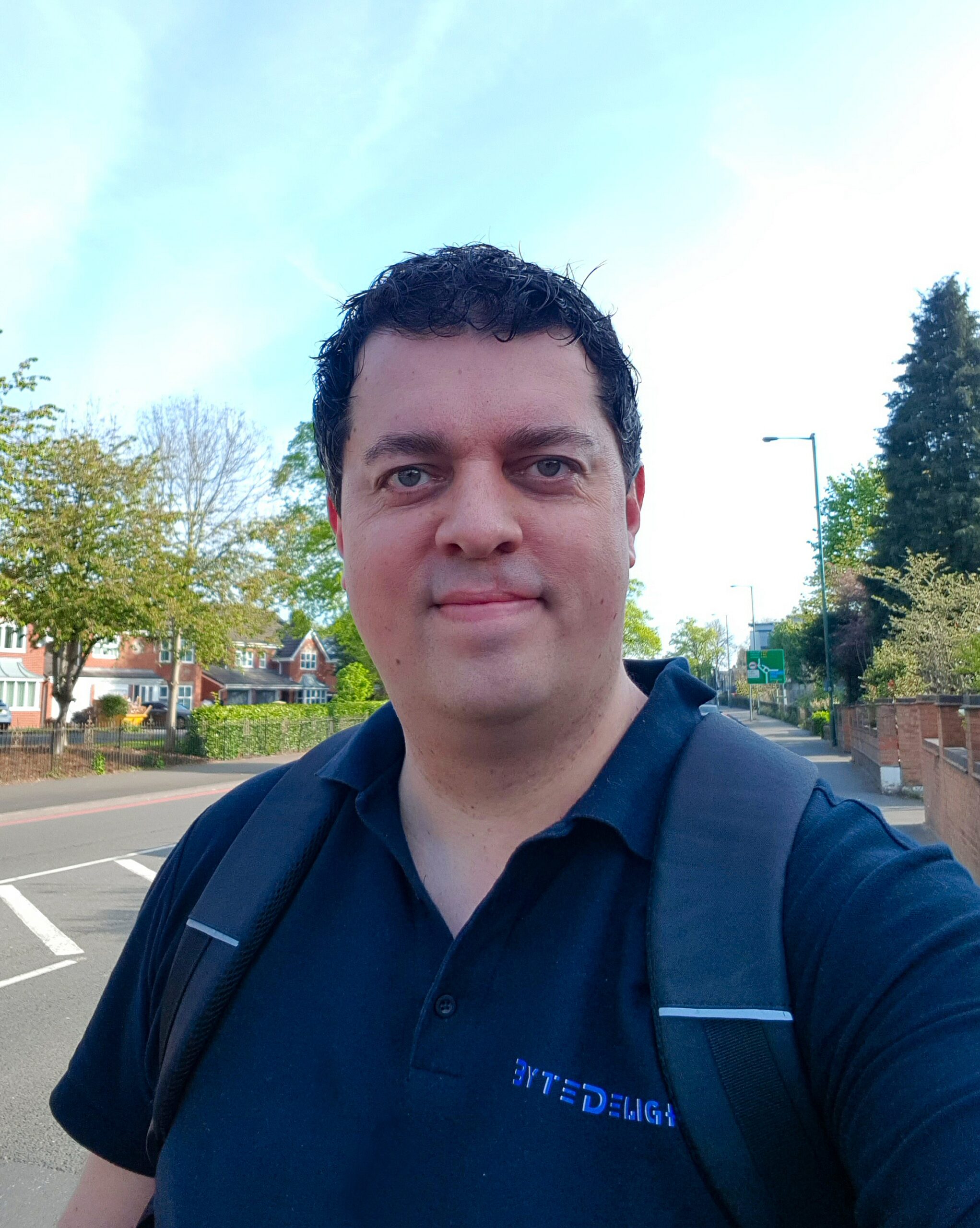 Yes, walked again, bad stuff…
Decided on my way over, to install Uber when I got there.

Some of the photos I made with insanely awesome people:

Chris Wilkins, who has some great ideas for hands-on retro events! 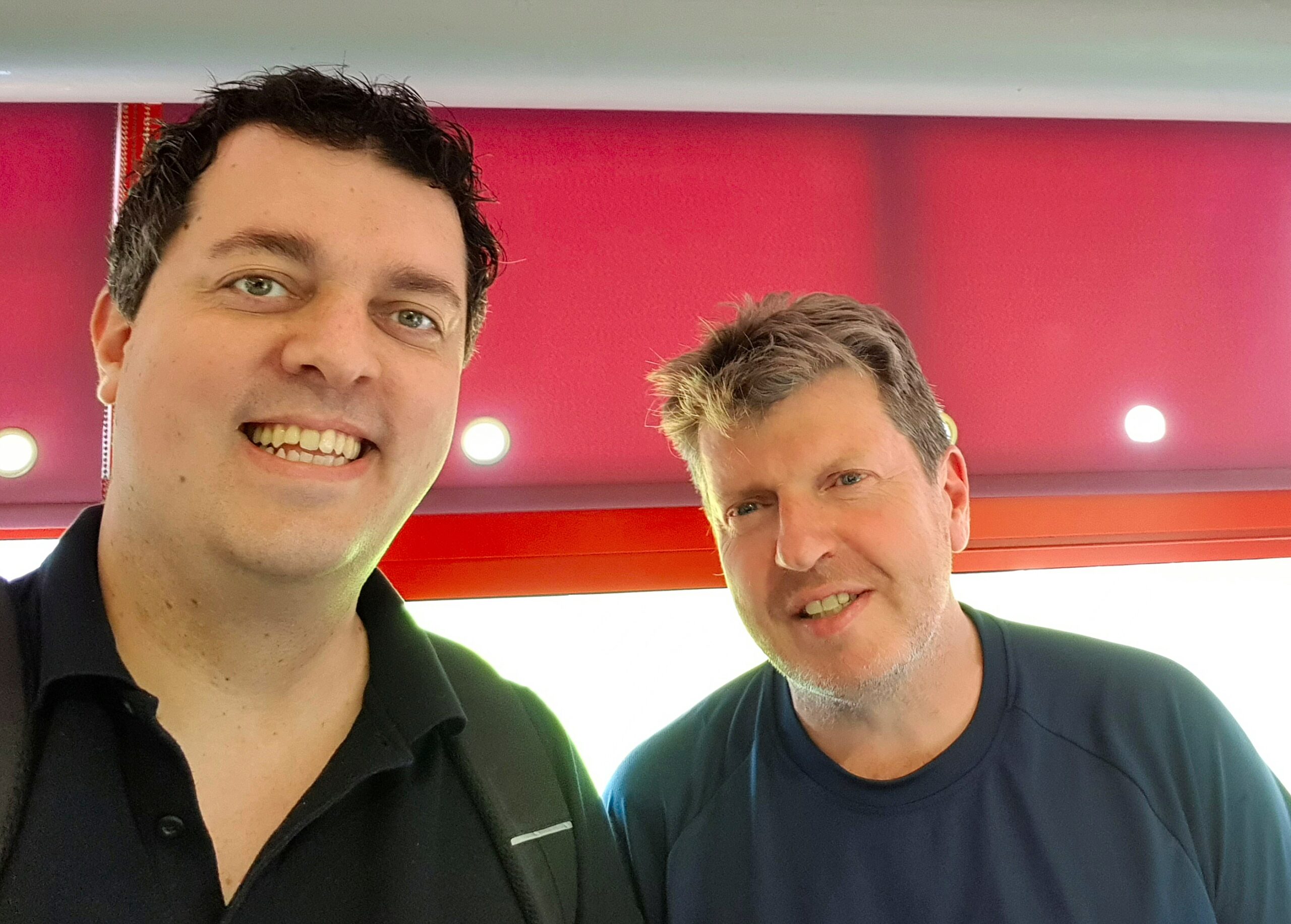 Peter Smith with his stall: 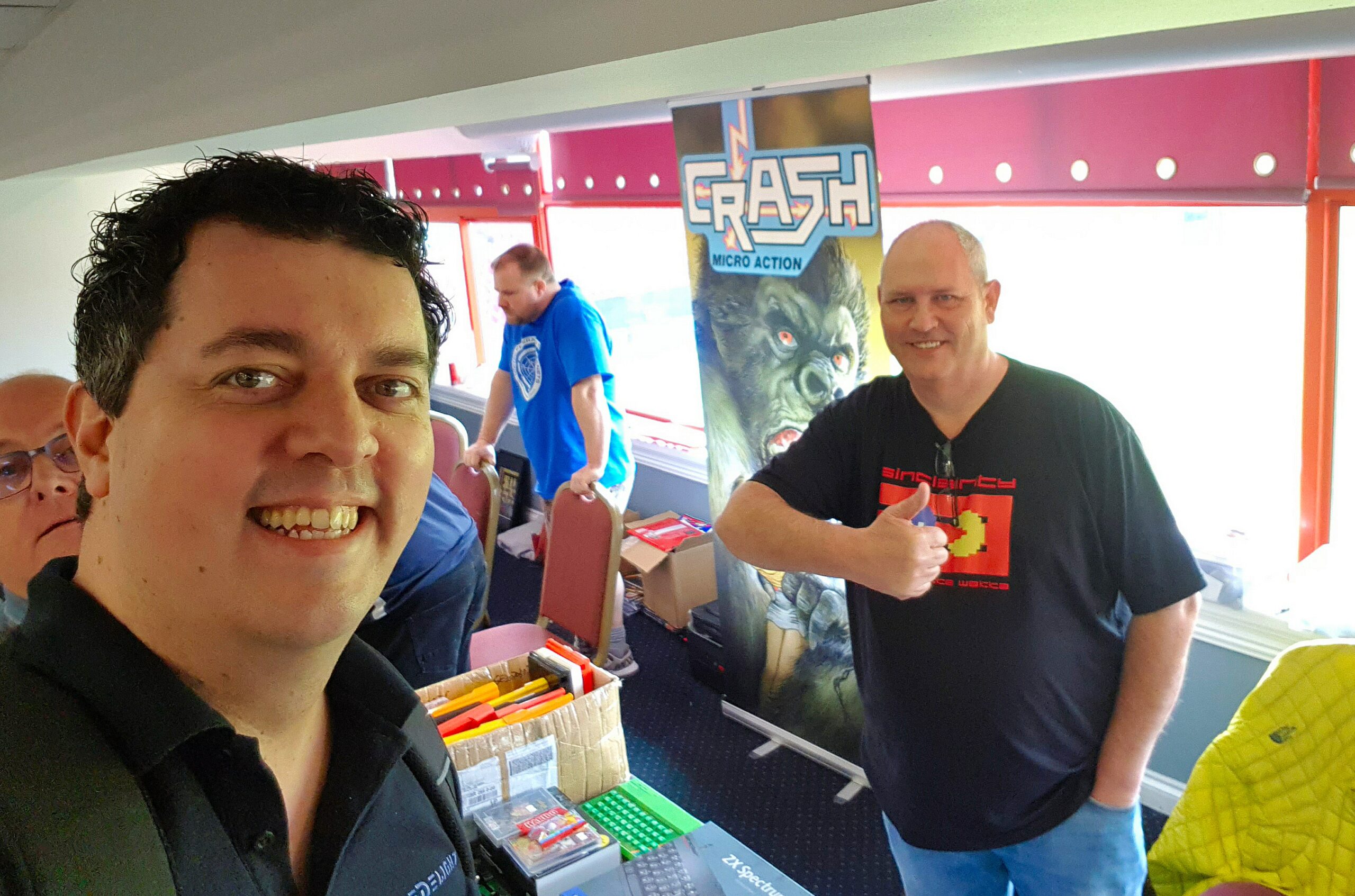 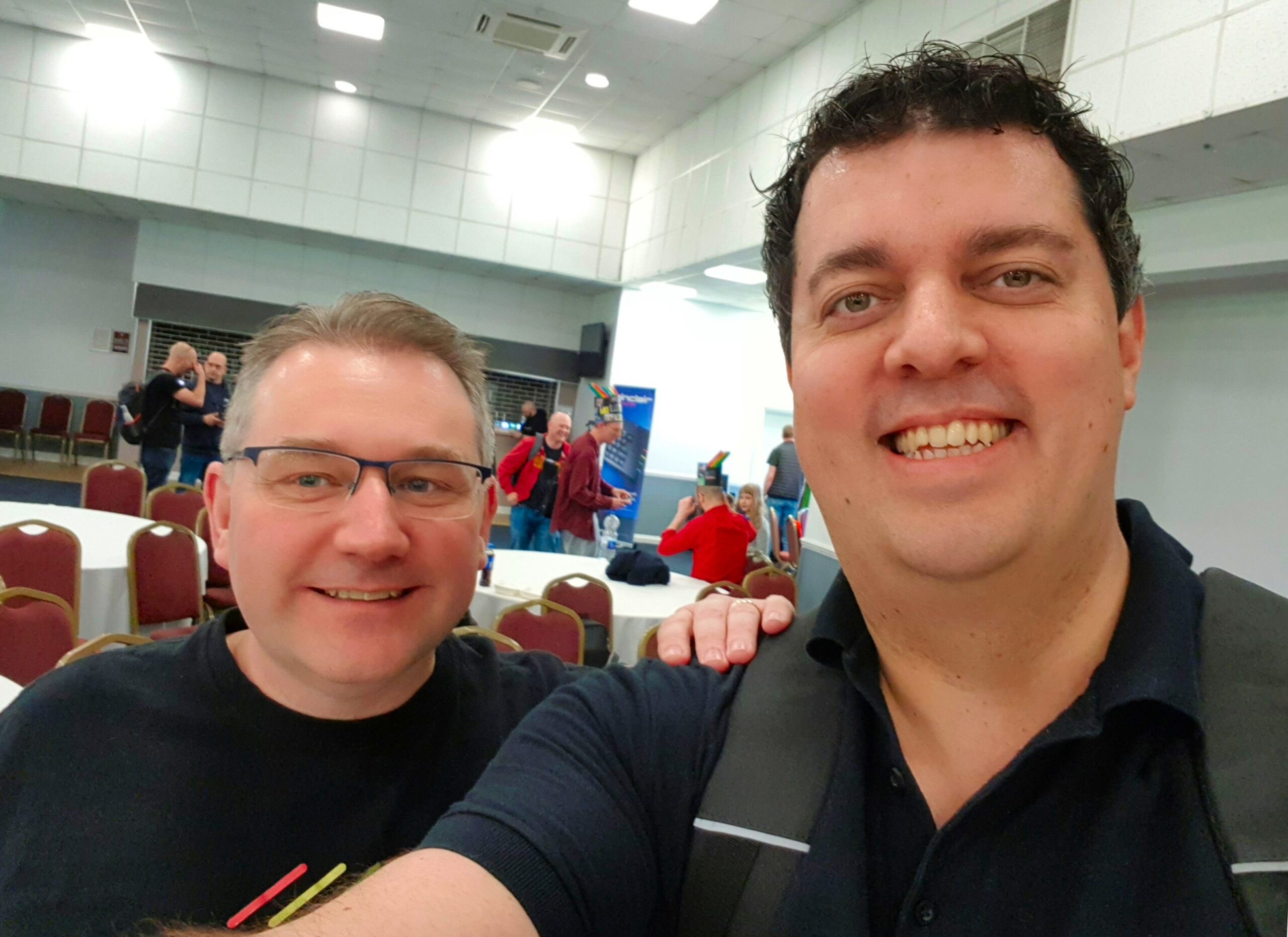 I also made photos with Andrew Owen, Mark Smith, and many others, but for some reason I can’t find them on my phone!

Had a great long talk with Andrew about the Chloe computer which we’re going to actually bring to the market.

Talked with Mark about loads of things, and the cherry on the pie: I’VE SEEN IT, TOUCHED IT, MY LIFE IS COMPLETE NOW! 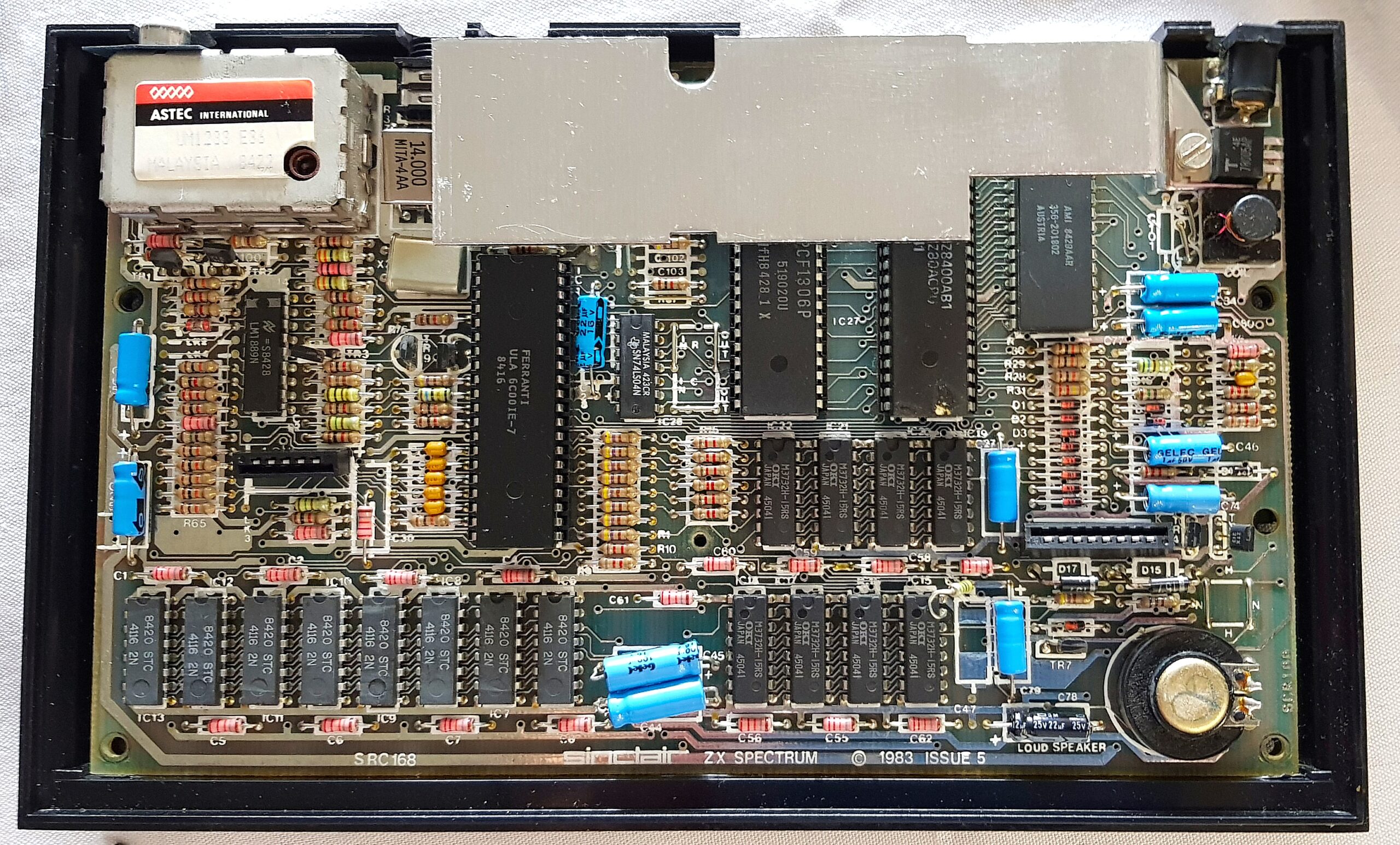 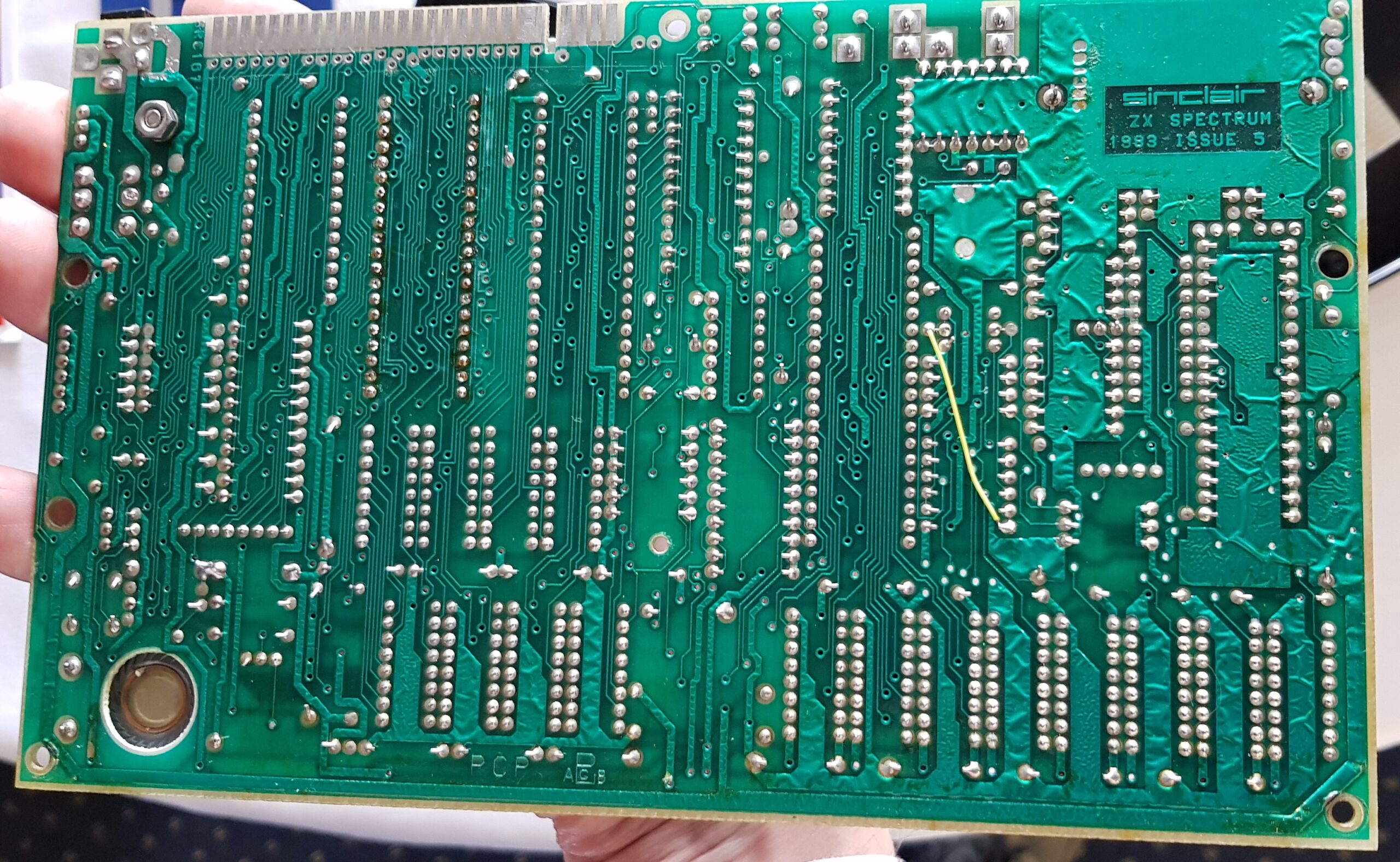 Pfew, that’s heavy stuff… Back on my feet… 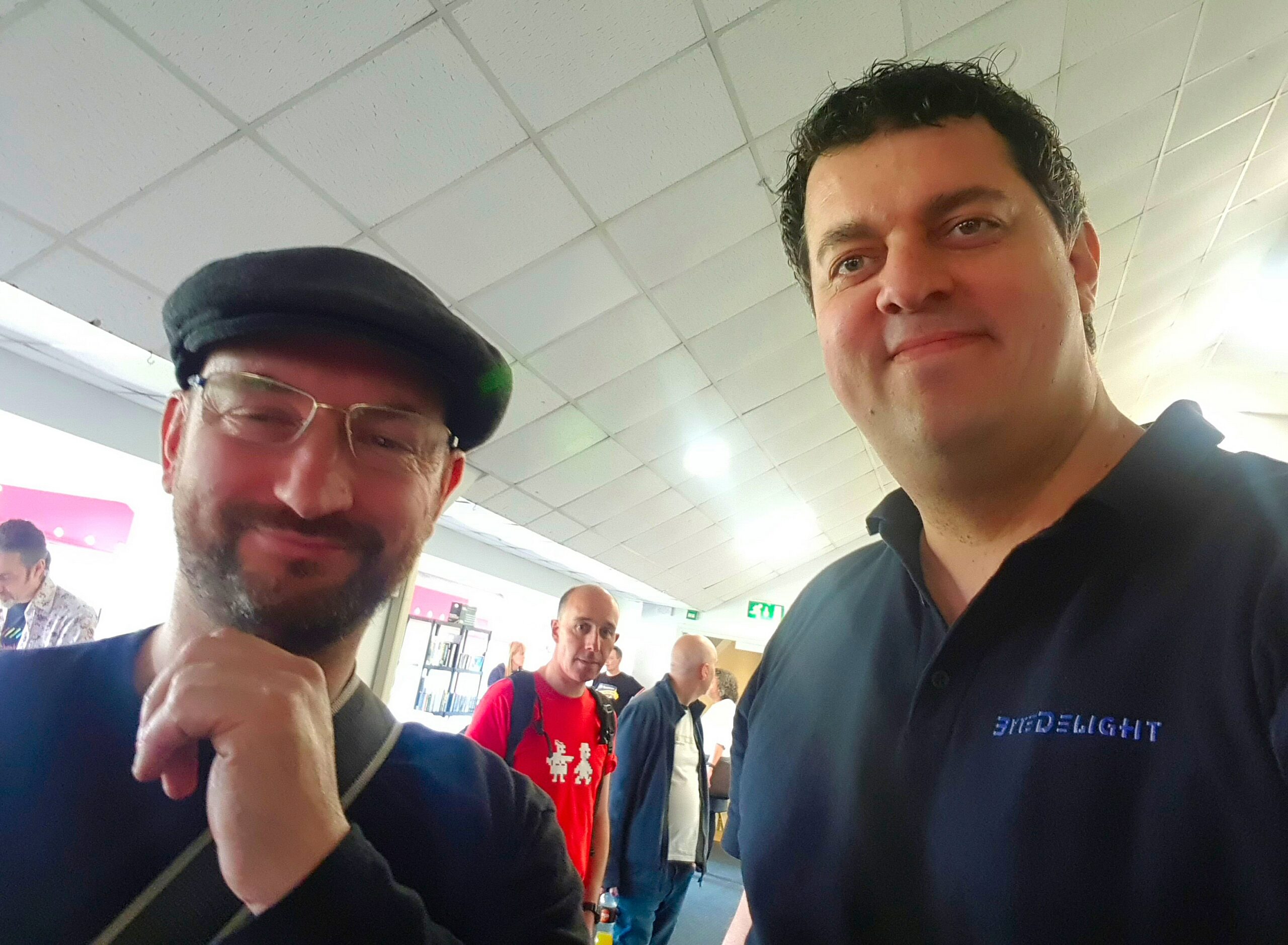 And Jason Railton, who made himself famous in one day, with this insane setup: 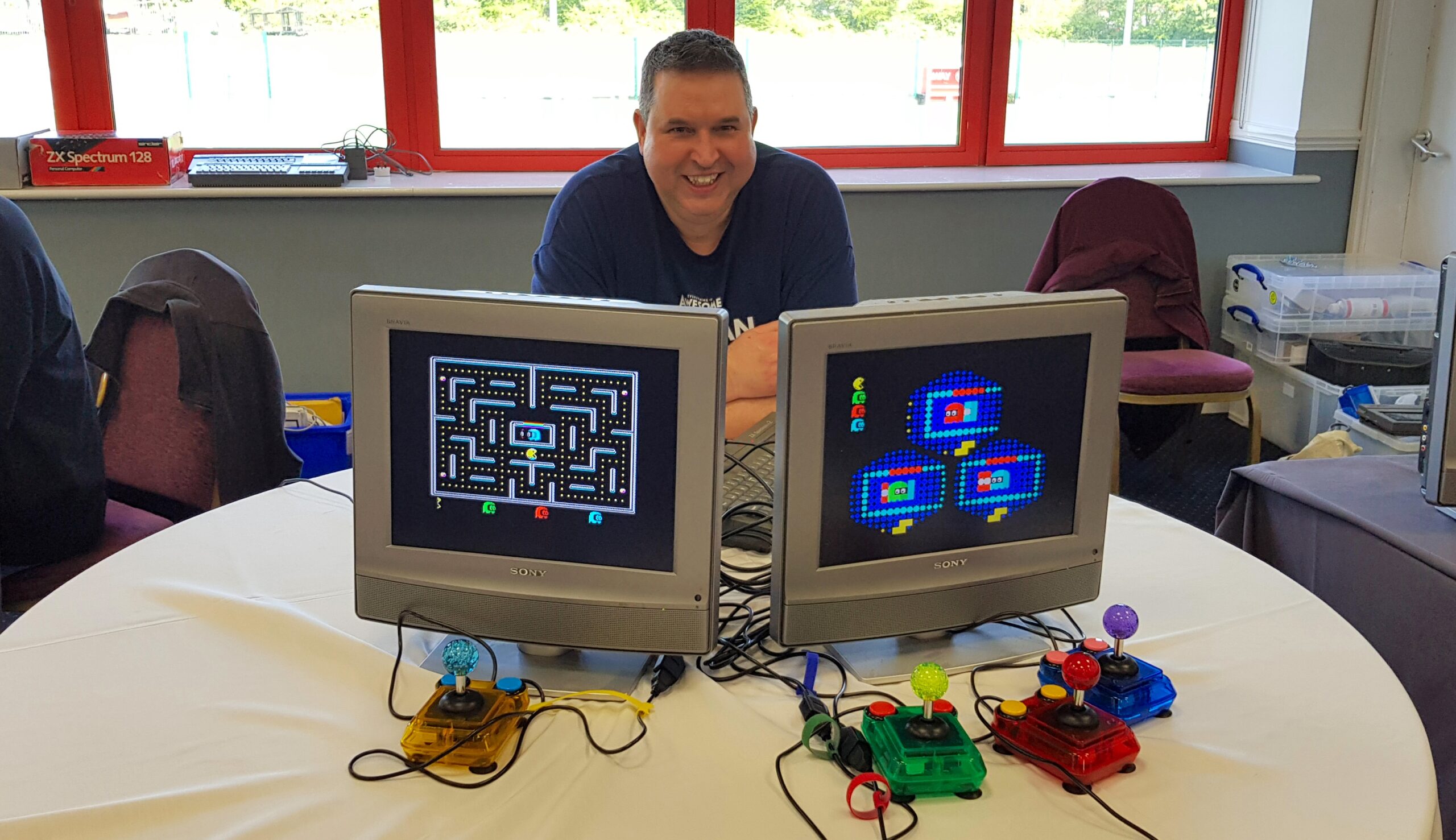 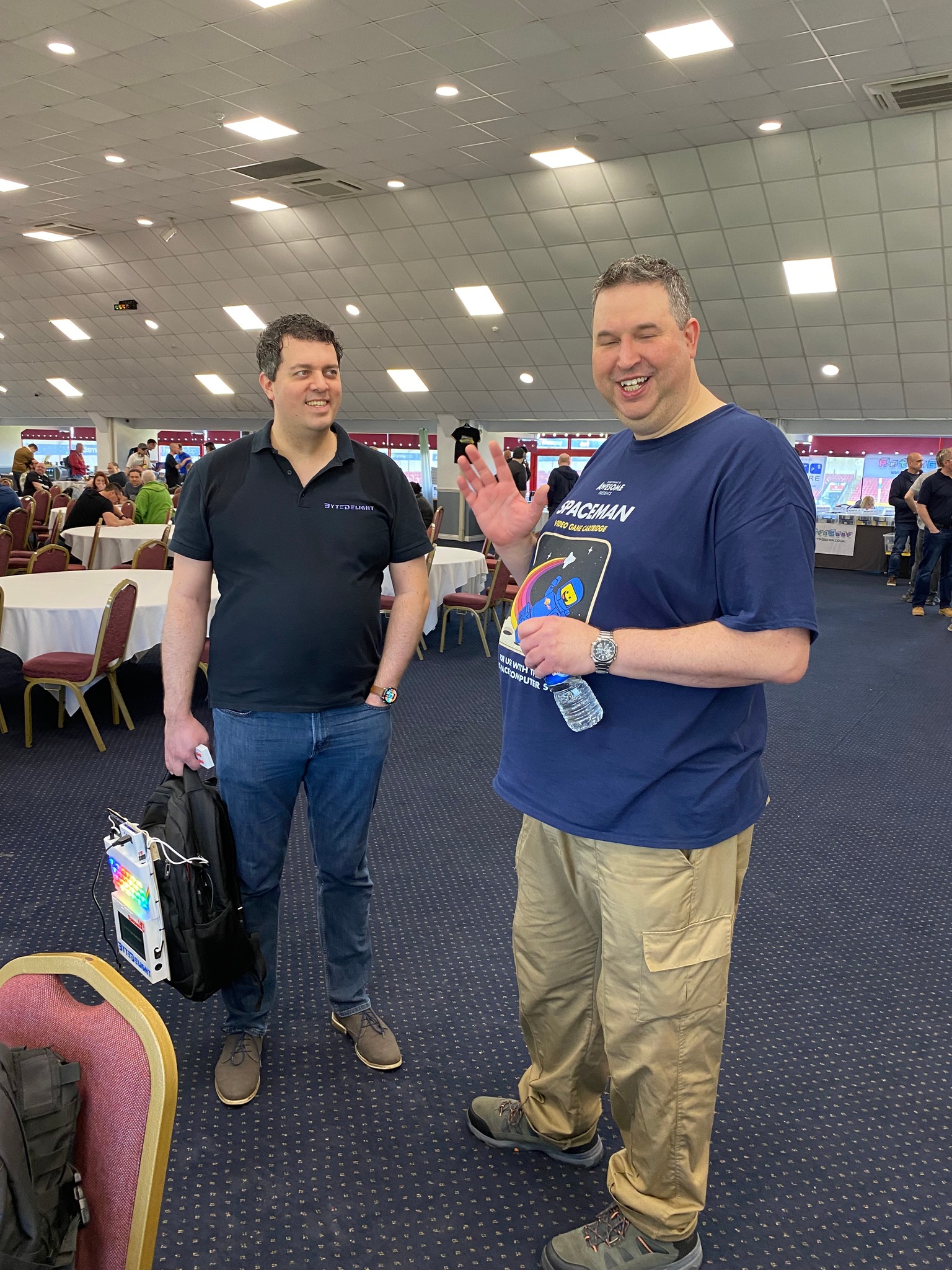 I’ll get into this more this year, with interviews with Jason, Mark Smith, Brendan Alford, and many more!

She explained to me how Choas worked, which I really enjoyed!!
Unfortunately the battery died just after making this photo – I’m so sorry Jessie! 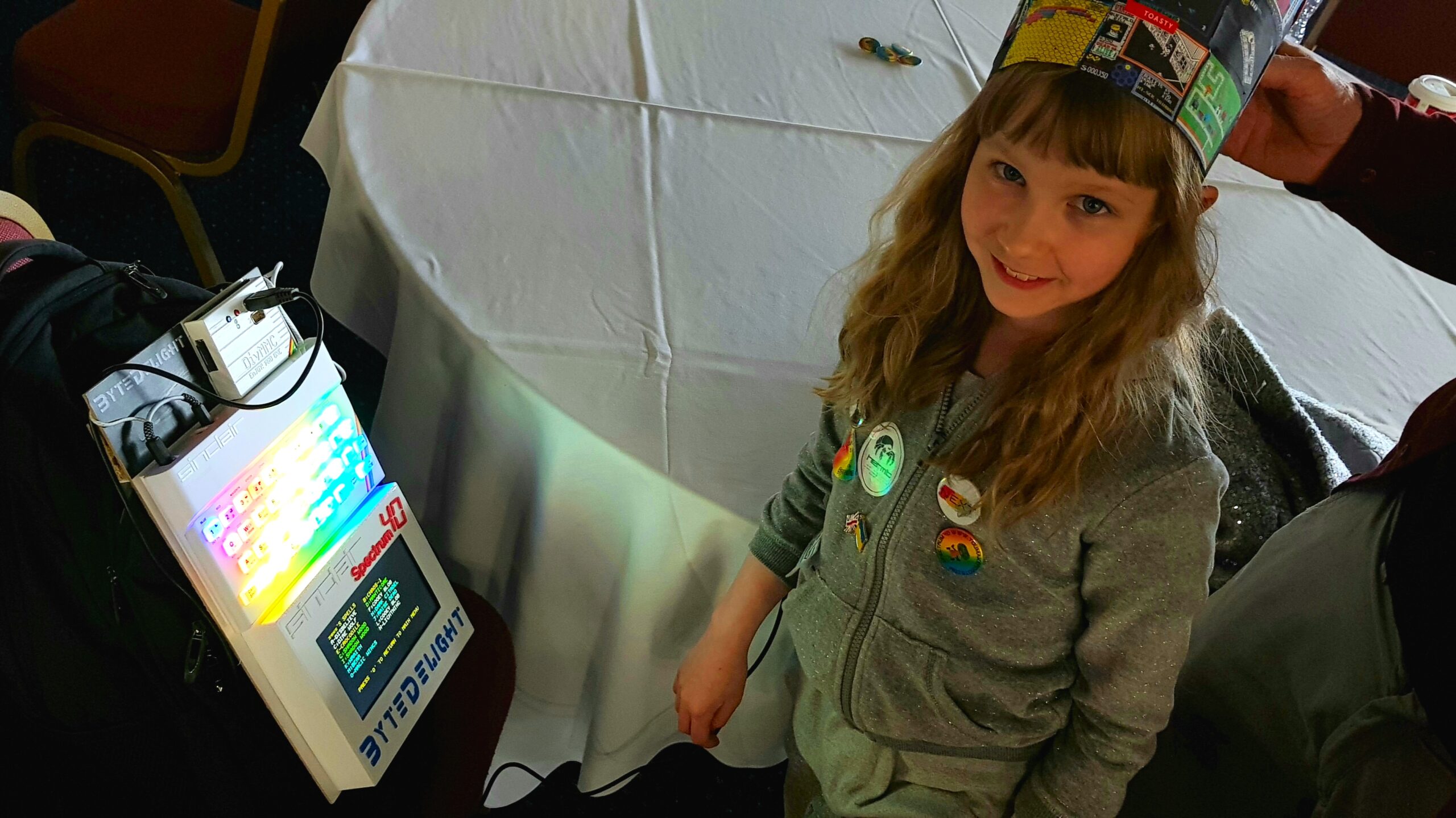 The battery, a simple Mi 10.000mAh powerbank, did hold up quite some time, about 6 hours!

Tim Gilberts made this photo of me. Well… more or less of me: 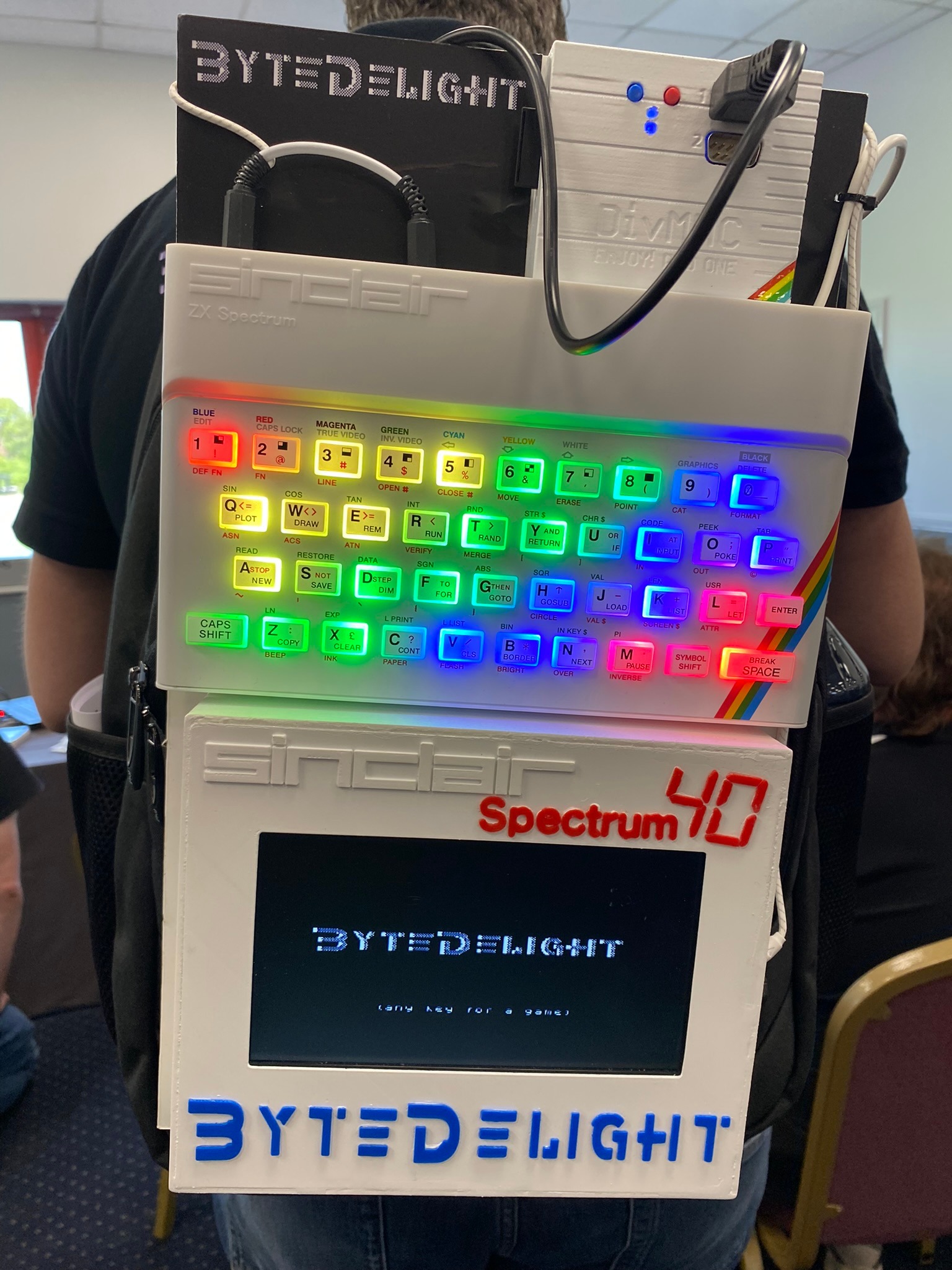 I did a ‘let’s do a short 3 minute live stream’-live stream of about 50 minutes:

I was exhausted after this day…
So I did install Uber, and got my first ever Uber ride! The guy didn’t say much..

Next morning I got up as early as I could, to be able to visit London to do some distanted photo challenge with my kids.

Here are some shots – I think I did everything they dictated me, but these are just a couple of them: 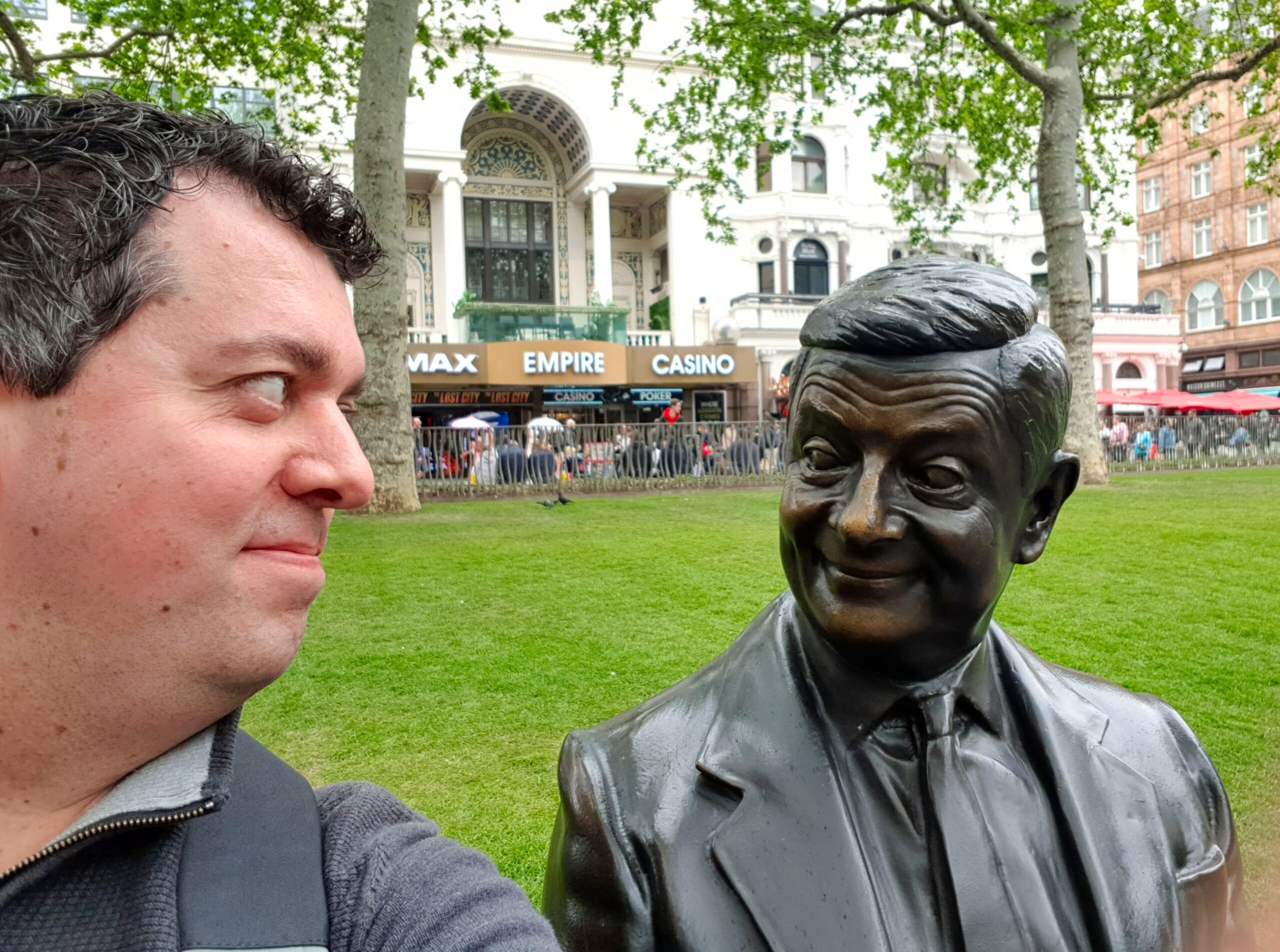 I’m bigger than the Ben: 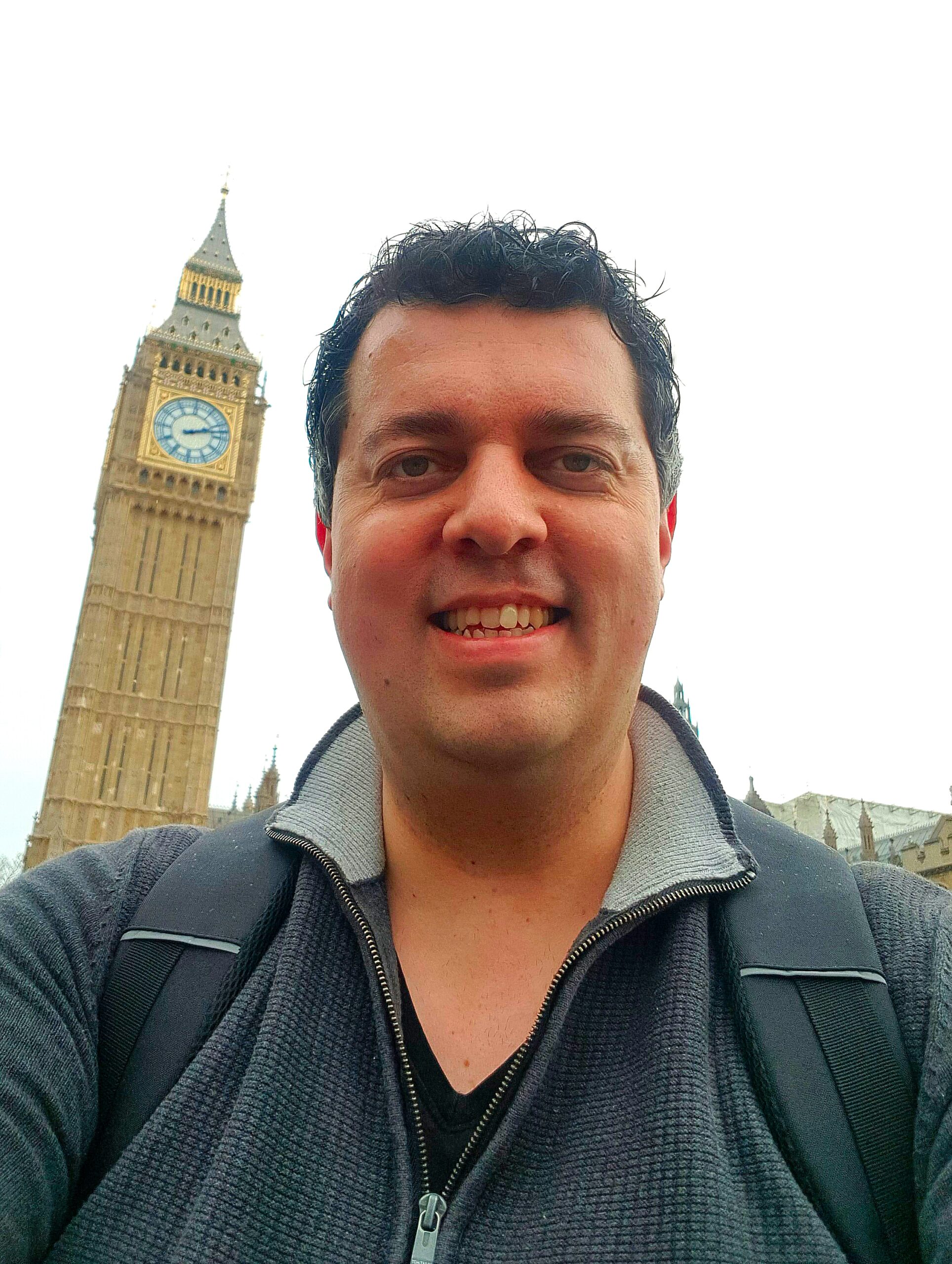 After a really lightning fast visit to London, I got to the airport, to.. relax 😉 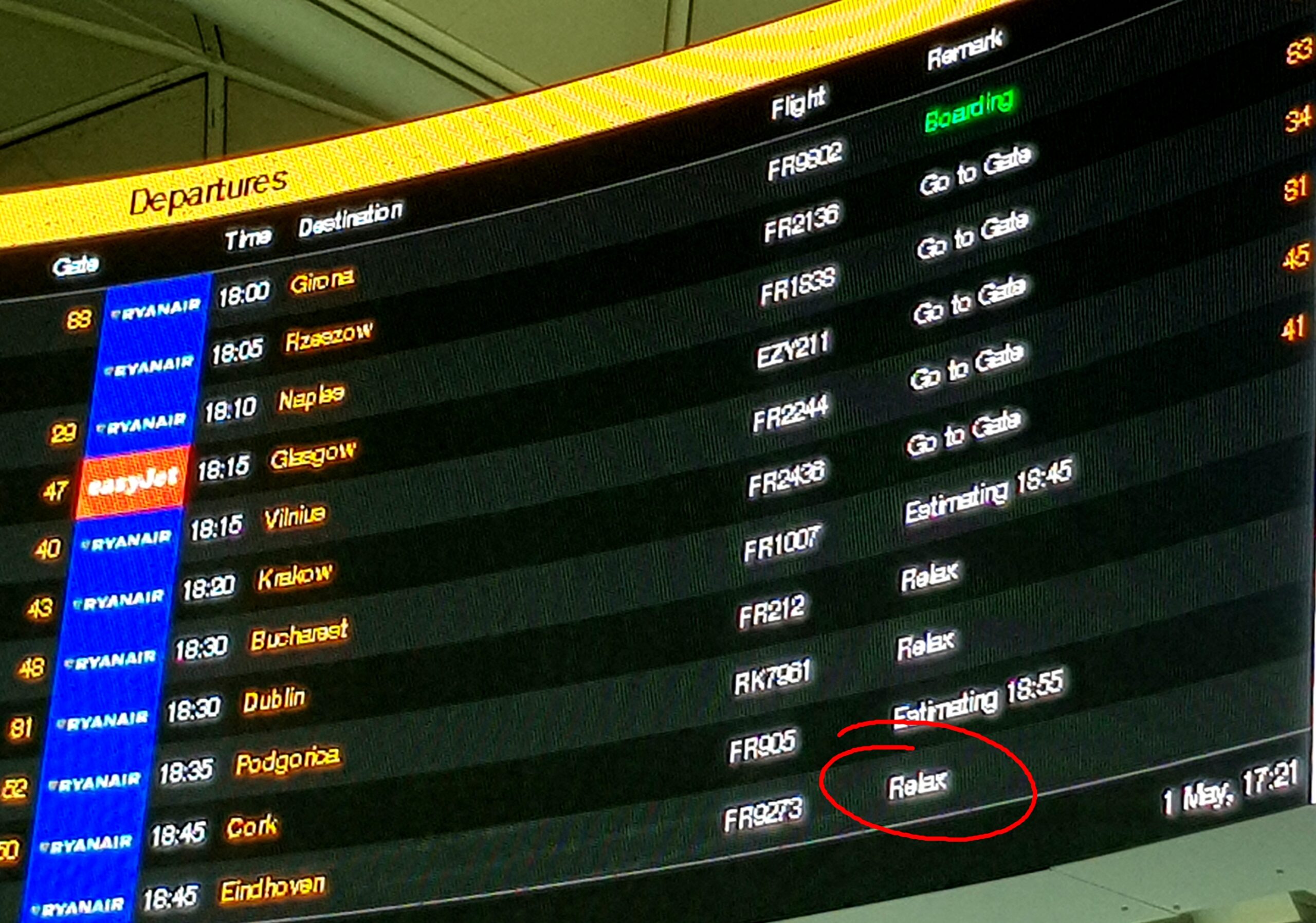 So I got myself some coffee. 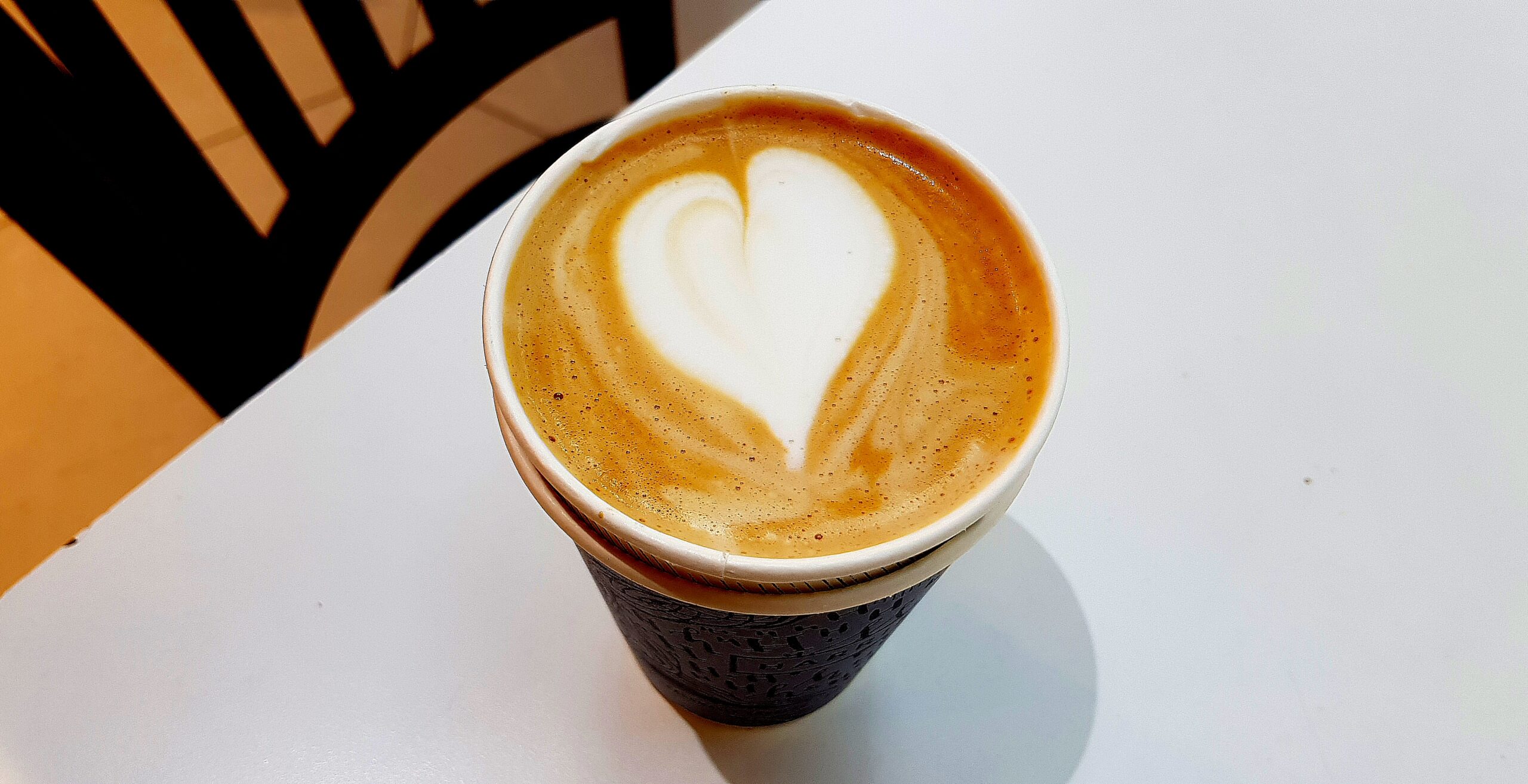 Then back up and… ‘immediately’ down again.

One of the souvenirs I took back with me: 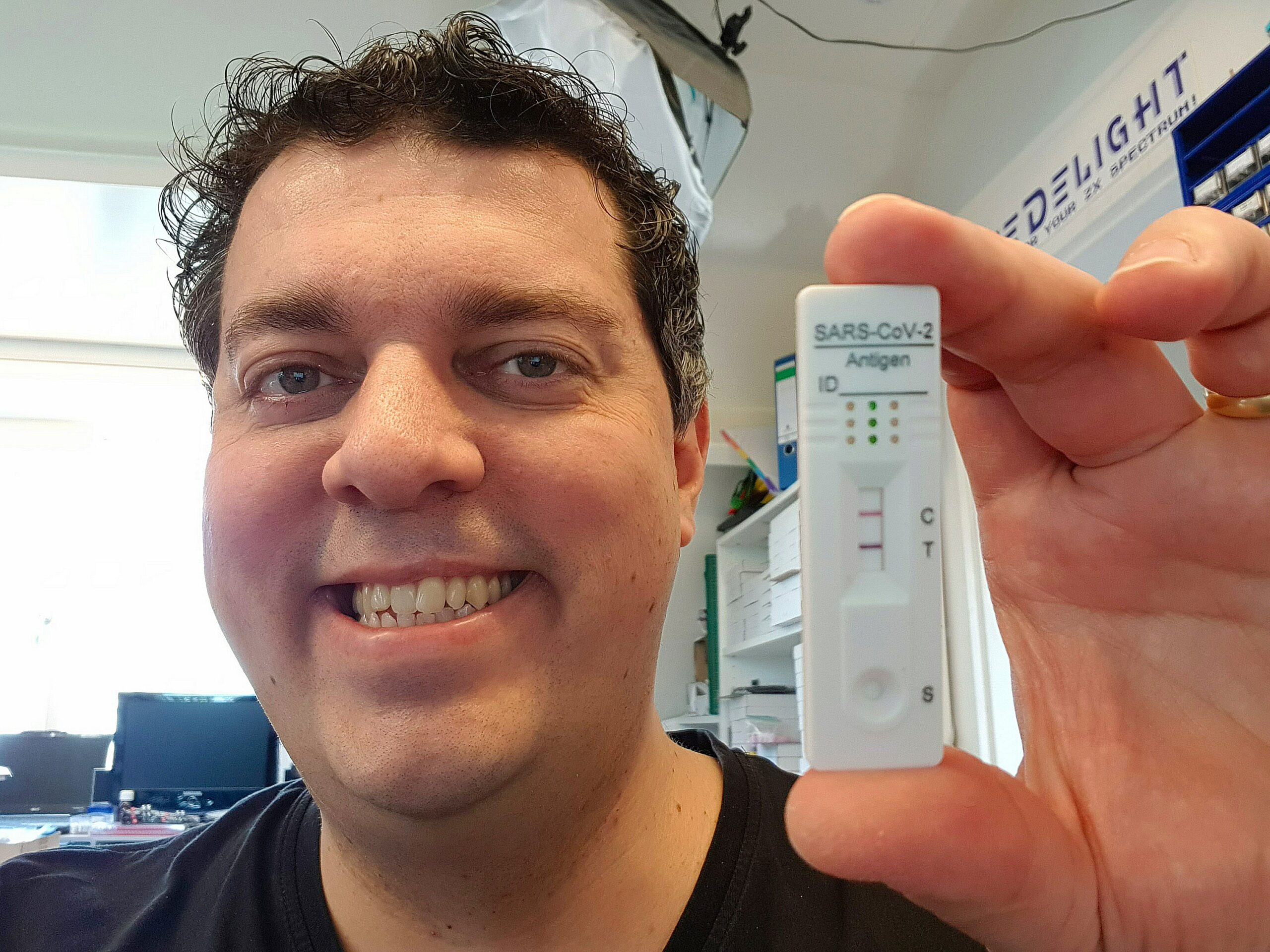 Yeah so, subway, train, plane, venue, really don’t know where or when I picked it up…
Anyway, I’ll live.

See you all in November!

I just created this page, dedicated to the TVM802A machine (a lot applies to the TVM802B as well).
I answer questions that I’m asked from time to time.

The TVM802A pick and place machine

Just created this page explaining how to use this chip:

To be able to finally process all open orders, repairs and other custom requests, I made the decision yesterday to put stock levels to 0 – stock levels will raise when new products are completely ready and on the shelves.

I’ve promised too many times to process all remaining repairs and other orders, but so far I haven’t been able to keep that promise – I am very sorry for that!

This, and another big reason for this change, is explained in this video: https://www.youtube.com/watch?v=OKUEor_KwXI

We recently discovered that many AY-3-8910 soundchips that currently can be obtained, are actually YM2149 soundchips, but ‘blacktopped’ and ‘remarked’ as AY-3-8910, most probably because of a demand for the AY-3-8910.
YM2149’s are indeed pincompatible and do work just fine instead of a AY-3-8910, but sound a little different (check out this video).

* The currently obtainable chips, mostly from China, are often blacktopped and remarked, but under the new layers of paint it might still or may not be be an original chip.
So IT CAN STILL BE SOME CLONE! We can’t tell for sure for all the chips on the market.

Some more background info based on our experience and the people we discussed this with:

When testing the prototypes with the -8910 chip, we discovered sound differences.
It turns out now, after some investigation (thanks to George Velesoft, Peter Smith and others) that these cheap “AY-3-8910” chips, are actually remarked YM2149 sound chips.

You can hear some differences between these ‘fake’ (they are good working YM2149’s, of which some say that those have some benefits over the AY-3-8910) in this video:

We have several sources of proof for these chips being YM2149’s.
One is a test tool that clearly detects the chip as YM2149: 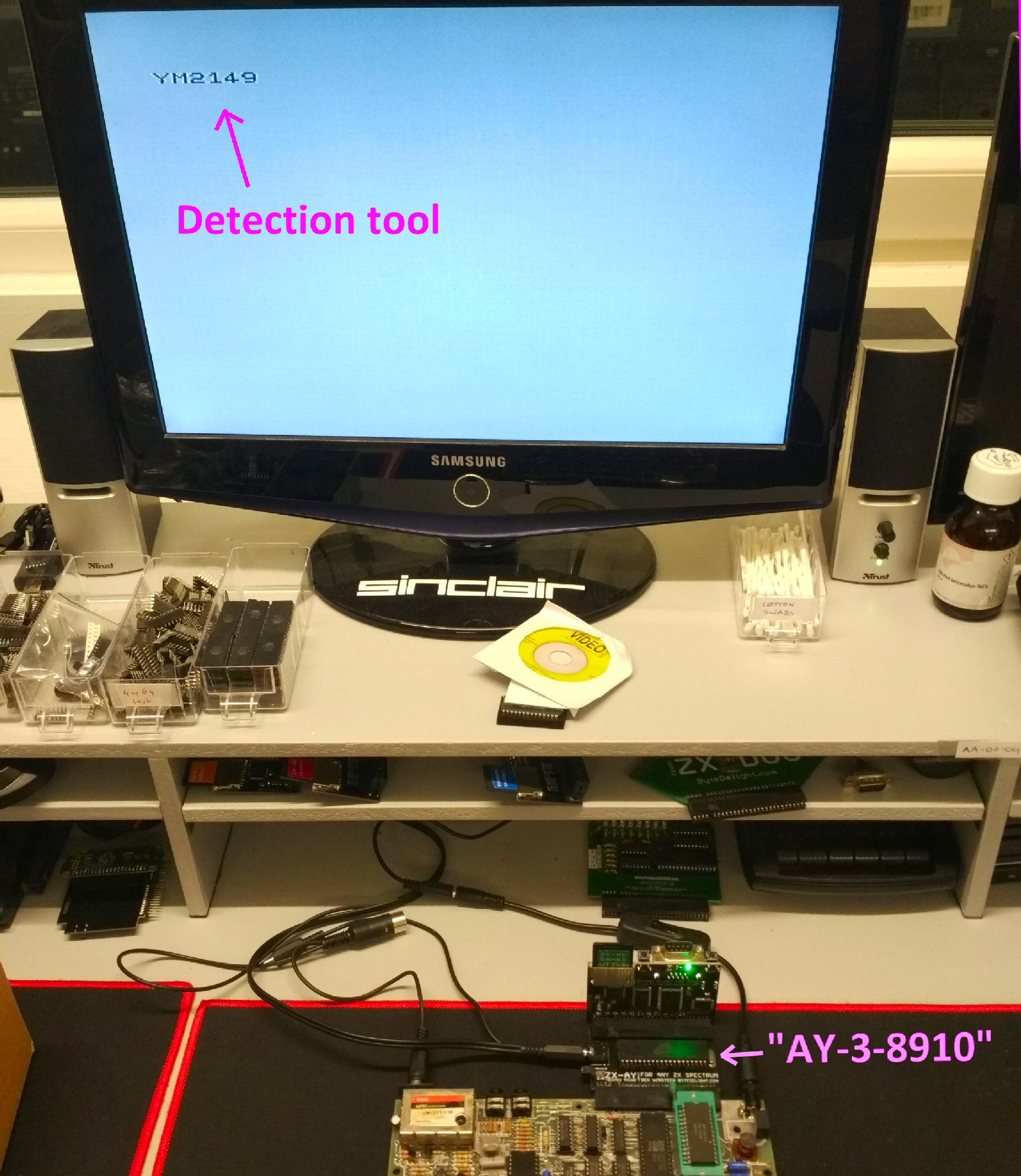 Another test we did is measuring / probing the audio output levels:
– An AY-chip should have a DC bias of about 0.2V.
– The YM2149 chips sits at about 2V. 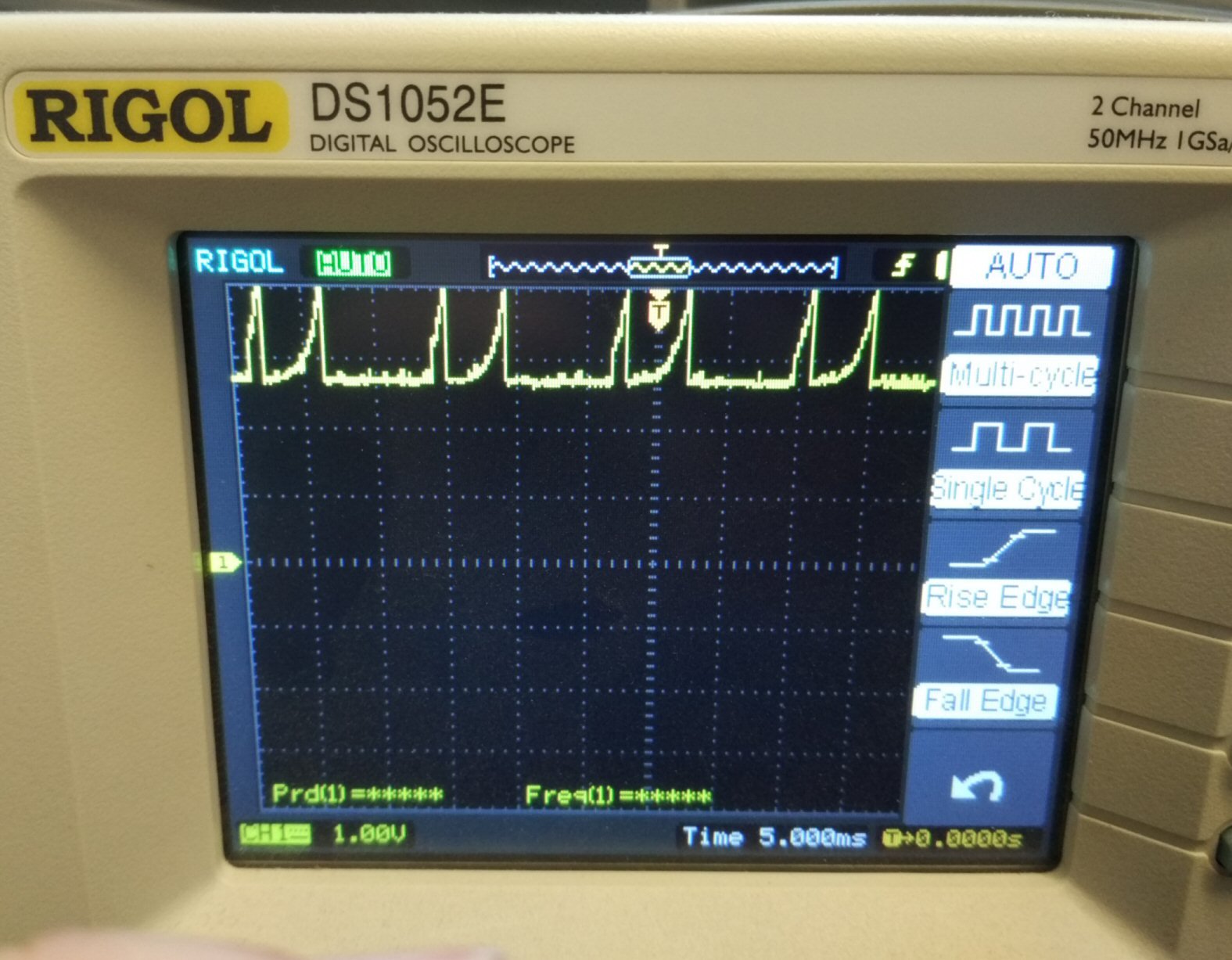 So if you’re here because you’ve been investigating the same, here’s your answer 😉

The differences between AY-891x and YM2149 are described here: https://maidavale.org/blog/ay-ym-differences